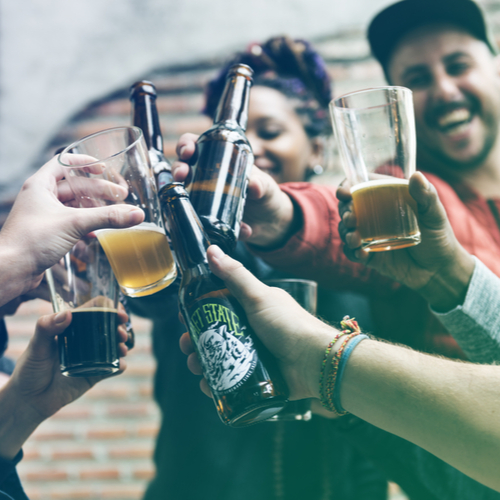 Most of us have been there at least once. You wake up after overdoing it the night before, bleary-eyed and groggy. Your mouth is desert-dry, and your head’s pounding. You’ve got a hangover and nothing’s good about the world at all. Or is it? A hangover remedy could fix you right up and help you get back to living your best life.

L-cysteine is an interesting supplement with a lot of potential benefits. Is it really a hangover cure, though? We’ll explore that and more below.

Symptoms of a Hangover

Before I dive into how to cure a hangover, it helps to know what a hangover really is. While the symptoms of a hangover vary a lot from person to person, and even morning after to morning after, some relatively common symptoms include the following:

What Causes a Hangover?

The cause of a hangover is simple—drinking too much alcohol. How does alcohol cause all those symptoms, though? Several different factors add up to equal a hangover, including:

An interesting note is that there is evidence that alcohols with higher concentrations of congeners (what gives alcohol its flavor) more often lead to hangovers, too.

Humans have struggled with the question of how to cure a hangover since the invention of alcohol. L-cysteine is only the latest in a long line of treatments. Others have included eating fatty foods, drinking lots of water along with the alcohol, and more. Does L-cysteine work as a hangover remedy, though?

There are signs that this supplement might be something to consider the next time you’re experiencing a hangover. In a study conducted in Finland, 19 men consumed significant quantities of alcohol (1.5 grams per kilogram of weight) over three hours. They were then given either a placebo or an L-cysteine supplement (either 1,200 mg or 600 mg). The subjects who received the 1,200 mg supplement experienced reduced headaches and nausea. Even milder doses helped to alleviate anxiety.

Other Remedies for Hangovers

While L-cysteine might be a promising solution for treating your hangover, there are other options out there, too. Of course, I also need to offer a word of warning. Alcohol abuse is no joke, and it can lead to major issues.

Alcohol abuse is a medical disorder and a type of addiction. It is described as a pattern of alcohol use in which you struggle to control your drinking. People suffering from alcohol abuse often think about drinking when they’re not, and they continue to drink even after drinking has caused problems in their life. Signs of alcohol abuse include the following:

Now that I’ve discussed alcohol abuse, let’s turn our focus back to other hangover cures. One of those options is to know what foods to eat before drinking. Nutrition plays a major role in your body’s ability to handle toxins (including alcohol), so eating the right foods before you drink can prepare it to handle what’s to come.

Generally speaking, you want to focus on fatty foods like avocado, salmon, or eggs. Other foods include bananas, which contain high levels of potassium. Beets, Greek yogurt, oats, and sweet potatoes are also on the list of eat-before-you-drink foods.

Another option here is to go with low-calorie cocktails. Alcohol contains a lot of calories, so low-cal options are lower in alcohol content. That means you can drink more without necessarily feeling worse the next day! Does that mean you’re sacrificing taste along the way? Not even remotely. Here are a few ideas for low-calorie, great-tasting cocktails:

You can (and probably should) also consider healthy cocktails. These might not be as low-cal as the ones I talked about above, but healthy cocktails pack in a lot of vitamins and minerals. This helps you replenish what’s lost to urination while you’re drinking. A classic mojito, a gin and tonic, and tequila kombucha are all great examples of these.

While I’m on the subject of health, I need to talk about the effect of alcohol on your workouts. There are several things to know here. First, alcohol packs a lot of calories, so you’ll need to work out harder to see the same amount of progress as if you didn’t drink. Second, alcohol (and hangovers in particular) make it harder to work out with your normal intensity and increase the chance that you’ll skip working out completely. Finally, alcohol also inhibits muscle performance by preventing muscles from absorbing the calcium they need, which can lead to cramps.

While L-cysteine might be a viable hangover remedy, the best course of action might be to limit your drinking in the first place. If you do indulge, do so safely, and understand how alcohol consumption affects your body.