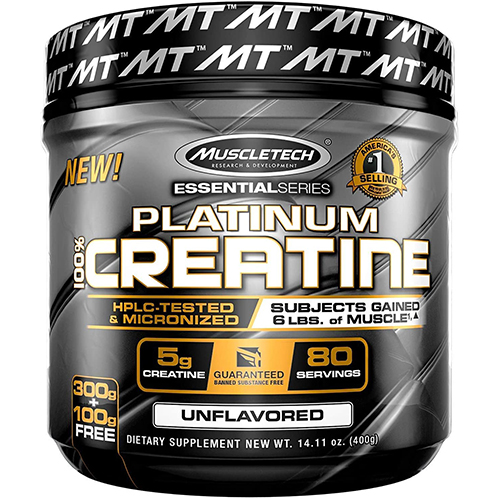 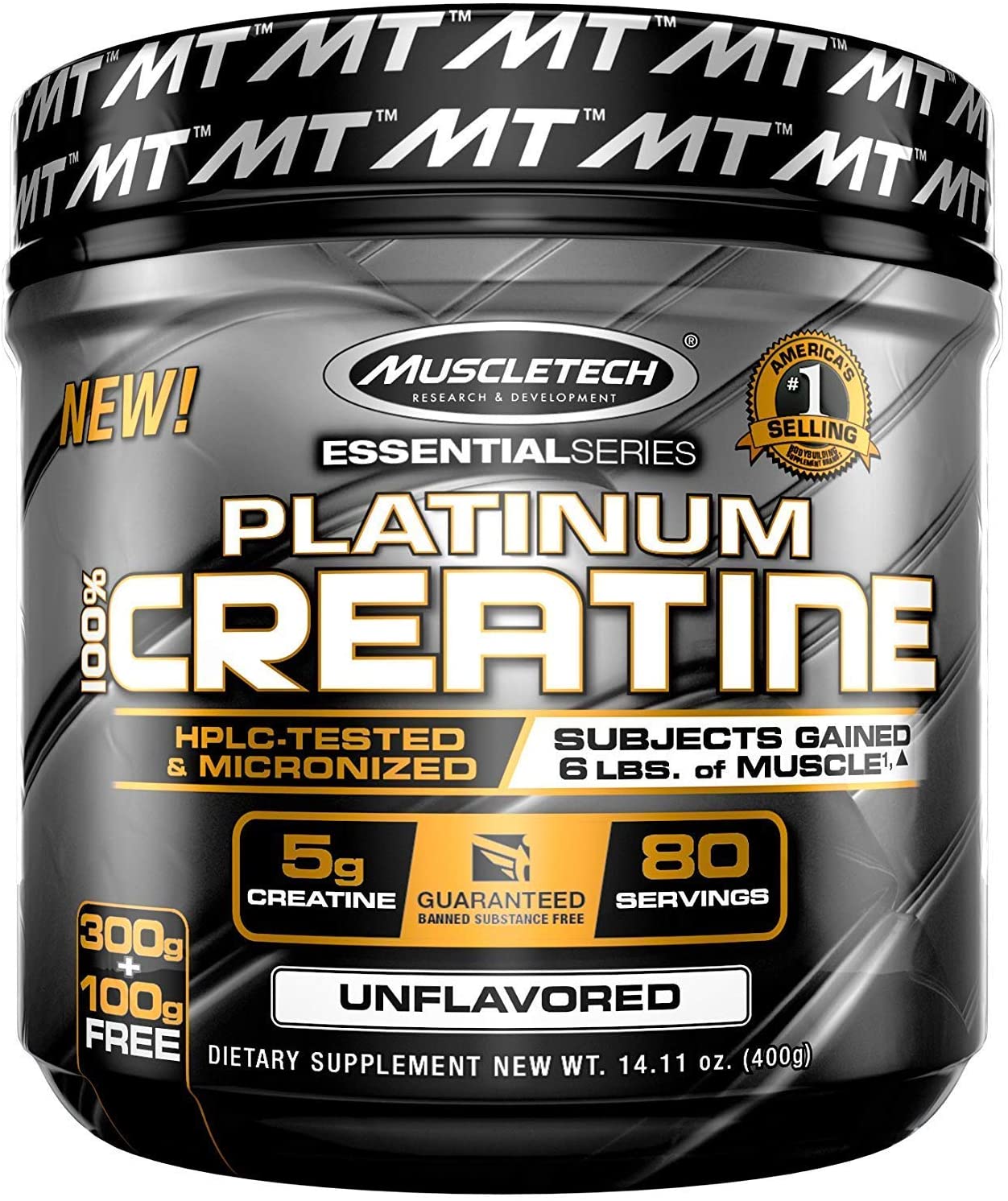 Because it is pure, MuscleTech platinum is flavorless. It also lacks a high glycemic carbohydrate that would otherwise act as a carrier to transport it to your muscle cells faster. It’s advertised as having no banned substances, but this claim is not verified by a third party lab.

Simple and pure source of micronized creatine monohydrate. Mix it with the ingredients you want, to ensure the best effects, such as a high glycemic carbohydrate drink or BCAAs. Very cost-effective at fourteen cents per serving. 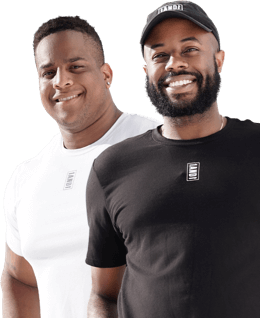 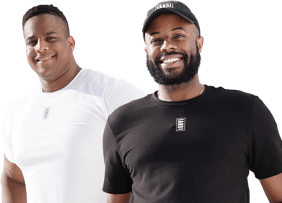 When it comes to getting bigger and stronger, there are a lot of questionable supplements on the market. But creatine isn’t one of them. In fact, creatine monohydrate is the most researched sports supplement on the planet. The consensus is that creatine will help you to get bigger and stronger. As a result, it’s no wonder that the market is saturated with the stuff. In this article, we provide an in-depth review of one of the most popular creatine powders—MuscleTech Platinum Creatine Monohydrate.

Creatine is a compound that is produced in minimal quantities by the human body. It is an important part of the Adenosine Triphosphate (ATP) energy cycle that is used to provide most of the energy that the body needs. ATP is critical for high intensity, short term exertion type exercise, such as weight training. Because of the body’s limited ATP stores, it quickly gets depleted, which causes you to lose strength.

When you take creatine as a supplement, you are able to boost the body’s supply. When you perform exercise, you lose a creatine phosphate molecule, so that Adenosine Triphosphate becomes Adenosine Diphosphate. However, that lost creatine molecule is now able to be replaced, recreating ATP and allowing you to get those extra reps.

Creatine has been shown to have benefits beyond its ability to replenish the ATP energy system. It may be able to boost the body’s production of proteins involved in the repair of workout stressed muscle cells. It also stimulates the release of the muscle building hormone insulin-like growth factor 1 (IGF-1).

Creatine even helps to reduce the symptoms of Parkinson’s Disease and lower blood sugar levels to help control Type 2 Diabetes.

Who is Creatine For?

Creatine is an ideal supplement for people who are regularly exercising in the gym. Sports players, bodybuilders, powerlifters, and endurance athletes will all benefit from taking creatine monohydrate on a daily basis.

MuscleTech is a well known brand in the fitness supplement industry. It is owned by Iovate Health Sciences which is based in Ontario, Canada. Iovate also owns other popular brands such as Six Star Pro Nutrition, Hydroxycut, and StrongGirl. MuscleTech has established a reputation for providing low cost quality products that really perform.

As far as supplements go, MuscleTech Platinum Creatine is about as simple as they come. It is one hundred percent creatine monohydrate powder. That means that it contains absolutely zero artificial fillers, colorings, flavors, or other ingredients. This is great, as all of those other potential contributors are doing nothing good for your health.

This form of creatine is micronized. That means that you will find it to have a fluffier consistency than creatine which is not micronized. Micronization makes the individual creatine particles smaller so that they can be absorbed and digested more readily. It also makes the powder easier to mix with liquid. This is a bonus for people who are using a spoon and a glass to mix up their creatine.

MuscleTech Platinum Creatine is one hundred percent creatine monohydrate. This is the most basic form of the supplement and is the most widely studied form. There are a number of other forms, including Creatine Ethyl Ester, Creatine Hydrochloride, Creatine-Magnesium Chelate, Creatine Nitrate, and Liquid Creatine, but none of them have been conclusively shown to have advantages over monohydrate.

MuscleTech Creatine is extremely well priced. You can pick up a four hundred gram canister, which is sufficient for eighty servings, for just eleven dollars. That works out to less than fourteen cents per day. That is considerably less than the other big players on the market. For example, Optimum Nutrition micronized creatine monohydrate works out to around twenty cents per serving.

What’s Not So Good

MuscleTech Platinum Creatine is a one hundred percent pure creatine product. As we’ve mentioned, that is a good thing. However, it also means that there is no flavor to the product. This provides you with a slightly sterile, neutral taste. There are also no extra ingredients. There is some evidence that the addition of a dose of a high glycemic carbohydrate can actually get the creatine into your muscle cells faster, so you do not get that benefit with this product. There are also no added branch chain amino acids, which can also have extra muscle building benefits.

Muscle Pharm certifies that there are no banned substances in this product. However, they do not employ a third party tester to verify that claim. The product is certified by Good Manufacturing Practices (GMP).

Creatine monohydrate may cause stomach upset in some people.

When to Take MusclePharm Creatine

It is recommended to take five grams of creatine per day. Because creatine cumulatively builds up in the body, the time of day that you take it is not critical. However, we suggest that you experiment with various times of day, including before and after your workout. Some find that taking creatine post workout when their muscles are glycogen depleted provides them with the best result.

For a long time, it has been recommended that creatine be loaded when you first start taking it. This involves taking twenty grams per day for five to seven days before tapering back to five grams per day. This, however, caused many people to have stomach problems. The latest consensus is that a loading protocol is not necessary when taking creatine.

Platinum Nutrition Creatine Monohydrate is a simple, pure form of creatine, the most attested sports supplement that exists. This micronized version of creatine is fast absorbing and easy to mix. It is also very cost effective, coming in at around fourteen cents per serving. However, if you are after a creatine that is fortified with high glycemic carbs or BCAAs, you need to look elsewhere. 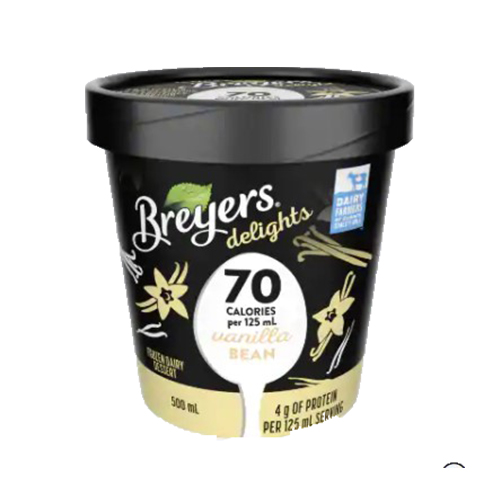 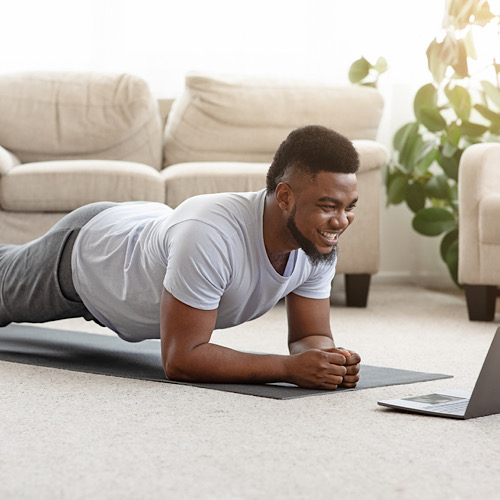 Four Best Home Workout Apps to Get in Shape 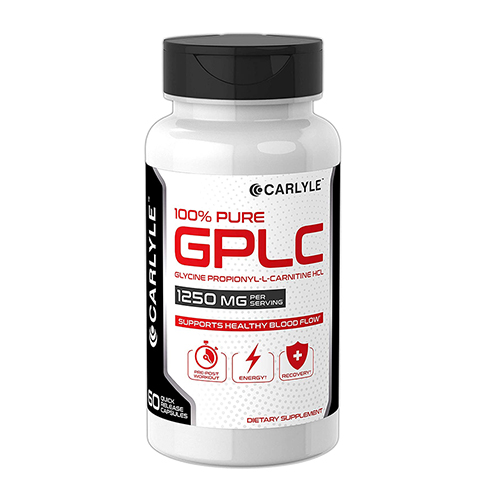